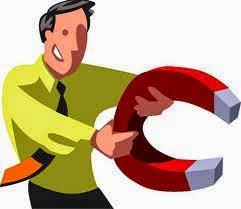 In my last post, I mentioned that we have the power to attract what we truly desire in life by attracting the people, events, and circumstances that lead us to the fulfillment of those desires. And that is generally the way it works. We are led to what we want . . . like following the flow of a stream to eventually reach our dream.

Sometimes, however, it works the other way around. What we want comes to us. We don’t have to follow the flow anywhere, or do much of anything. What we want just shows up on our doorstep—sometimes, quite literally. That is rare, of course, but it happens. And I’ll never forget one particular time it happened to me:

When Carol and I were first dating, we lived in two separate apartment complexes just north of Dallas, Texas. One night, Carol came over to my apartment to cook me a spaghetti dinner. She brought a loaf of French bread with her, and she asked me if I had a bread knife. I responded by asking her why she brought French bread, since we were having spaghetti. Shouldn’t she have brought Italian bread, instead? Silence ensued. Okay. Bad joke. So I answered her question. “No, I don’t have a bread knife. But I have a set of Ginsu knives. As seen on TV, those things will cut anything!”

Not so. You know what a Ginsu knife can’t cut? Bread! No matter how carefully I tried to slice it, the bread would only shred and tear and rip into jagged little pieces. “You really need a bread knife,” Carol said. And I agreed. I did, indeed, need a bread knife. Which reminded me of something else that was needed, too—something we both needed, in fact.

You see, at the time, Carol and I were spending one or two evenings a week visiting her mother, who lived in a nearby nursing home. The problem was, there was only one easy chair in her mother’s room, which meant at least one of us would end up sitting on the side of her mother’s bed. So while we were on the subject of needing things, I said to Carol, “You know else we need? A couple of chairs to sit on when we visit your mother.”

That’s all I said, and Carol agreed. But there was a little more to it than that. Because when I said “chairs” I was actually envisioning something very specific. Ideally, I wanted two straight-back, cherry wood chairs with red-and-green upholstered seats, so they would match the other furnishings in her mother’s room—namely, the cherry wood chest-of-drawers, and the red-and-green drapes and bedspread. (For a man, I am very decorator-oriented.)

This conversation occurred around 8 o’clock on a Friday night. Afterwards, Carol and I enjoyed our dinner of spaghetti and shredded bread, watched a little TV, and then Carol went home.

The next morning I woke up, looked out the window, and was greeted by a strange sight. Someone’s possessions were scattered all over the greenbelt between my apartment building and the next one, and there were a lot of people milling around and looking through it all.

I quickly threw on some clothes and went outside to see what was going on. I was told that a man in a nearby apartment had to be forcibly evicted. He had been given many months to pay his rent, but never did. Finally, the police were called to escort him from his unit, and everything he owned was removed and placed outside. That’s how forcible evictions work, I learned.

I felt bad for the man, and asked if there was anything I could do to help this person gather up his stuff and move it someplace. “No, he’s already gone,” a neighbor explained. “He rented a truck early this morning, loaded it up with everything he wanted to keep, and drove away.”

“If you really want to help,” this person continued, “you should look around and see if there is anything here you want or need, and take it. In fact, you would be doing the office staff a big a favor. They would love it if everything out here was gone by the end of the day, so they won’t have to haul it off themselves.”

“No problem,” I replied. “I’ll be happy to look around.” So I did, and I quickly spotted a few things I could use, including two things in particular. You know what’s coming next, right? You guessed it. Only 12 hours after deciding I needed a bread knife and two straight-back, cherry wood chairs with red-and-green upholstered seats, there they were . . . laying in the grass right next to my apartment. Amazing! Absolutely amazing!

Wouldn’t it be nice if the manifestation process was always that quick and easy? You might think so, sure. But as I have pointed out in prior posts, there can also be a great deal of satisfaction in patiently following the flow to the fulfillment of your desire, instead of just having it instantly appear. Either way, the experience can be just as miraculous and just as joyful.

Whether your desire is fulfilled overnight, or over time, here’s to staying present in the process and appreciating every single moment of it.

I just LOVE this story! And so needed to read this today. I am "wandering" a bit as author/writer these days. Not sure what my next move will be but this post causes me to look at all the tweets and such that come my way with a more critical, expectant eye! And to visualize the things that I want like I used to. Thanks, Steve!