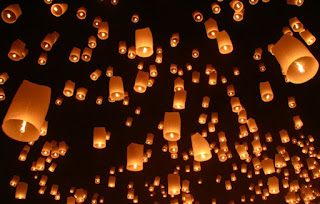 Recently, for the birthday of my wife, Carol, I arranged for her to fulfill a long-held desire—to participate in a Lantern Festival. If you are not familiar with a Lantern Festival, it’s when a gathering of people simultaneously release illuminated paper lanterns into the sky. The lanterns themselves can be quite large—as large as 3 feet tall by 2 feet wide. At the bottom of each lantern is a combustible material. And when the material is lit, it not only illuminates the lantern, but it also fills it with hot air. Eventually the lantern becomes light enough to rise up into the sky and float away—just like a hot air balloon.

Some festivals are attended by dozens of people. Some are attended by hundreds. Our event was attended by thousands—more than 6,000, it is said. From pictures and videos I had seen, I knew that the releasing of the lanterns would be beautiful. But when the moment came to release our lanterns, I was surprised by the emotions that overcame both Carol and me. In fact, we were both touched to the point of tears.

So why did we experience such strong feelings? Well, there is something I didn’t mention about the preparation of the lanterns. Before the lanterns are inflated, each person writes upon it his or her dreams, goals, prayers, or affirmations. Some people express desires for a better house, a perfect job, or a loving relationship. Others seek abundance, happiness, or a healing. And some write down messages to loved ones who have left this plane of existence.

It has been a long time since I have experienced such a profound sense of universal unity. And I suppose that is what brought tears to my eyes, and to Carol’s eyes, as well. It was truly a moving moment, which was made even more moving by the inspiring songs that were being played during the release, such as “Imagine” by John Lennon, and “You Raise Me Up” by Josh Groban.

If you would like to attend a Lantern Festival near you, I invite you to visit this website: www.thelanternfest.com. It will be an experience you will never forget—an experience that is as inspiring as it is illuminating.

Here’s a video of the moment Carol released her lantern:

Posted by Steven Lane Taylor at 9:11 AM

I did attend this event recently in Queen Creek, Arizona. I, too, noticed the feelings of hope and unity for the first time in a long while. Thank you for sharing this perspective! Peace, Christine