A Lesson Learned The Easy Way 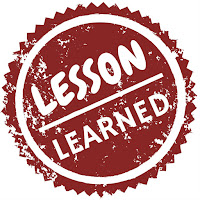 In my second book, “Further Down The Stream,” Chapter 38 is titled, “Grow With The Flow.” The idea in this chapter is that before you can successfully achieve a dream—or just live a happier, more fulfilling life—you may have to grow in some way. You may have to mature mentally, emotionally, or spiritually. You may have to heal something or learn something.

In order to bring that healing, learning, and maturing experience about, your inner Divine Spirit—in cooperation with the inner Divine Spirit of others—will orchestrate a challenge for you that will give you the perfect opportunity to heal, learn, and grow. Once the healing happens or the lesson is learned, you will no longer face that exact kind of challenge again.

What is truly fascinating about this process, however, is this: If you learn the lesson quickly enough, the challenge you are facing may dissolve before you actually have to go all the way through it. Here’s an example:

At one point in my former career as an advertising writer, I was up for a big promotion. The Creative Director of our group was leaving to head up a brand new group within our agency, and I was being considered to replace him. It would be an easy step up for me, because I had already been assisting him in leading our group for several years.

Well, I didn’t get the promotion. For reasons not relevant to this story, my company decided to hire a Creative Director from outside the company—someone with no experience in working at our agency, leading our group, or handling our particular accounts. I was disappointed, to say the least.

I thought I would get over my disappointment in time, but instead, my disappointment quickly turned into anger. Why? Because the new Creative Director—whom I will call Martin—never acknowledged my experience as an assistant director. He never asked for my opinion. He never sought my advice. And worse, I thought the decisions he was making (without my input) were hurting the quality of our work. In short, as far as I could see, he was a lousy manager.

Did I say I was angry? Correction. I was furious! And what did I do with all that anger? Nothing. Day after day after day, I just sat in it, stewing and brewing and letting my anger build. And then, something fortunate happened.  Before I exploded and did something I would regret, my former Creative Director called me and invited me to join his new group. Although he didn’t need an assistant to run this kind of group, he did need another writer to pair up with one of his art directors. I accepted his invitation immediately.

I was greatly relieved to escape what I believed to be an intolerable situation. But notice something: no healing or learning had yet taken place. And that’s where this story gets really interesting.

After happily working in my new group for about two years, one day I received some surprising news. Whether it was because of poor management, or it was due to other factors, my former group—the one led by Martin, the Creative Director I detested—had been disbanded. The company still felt that Martin was of value, though, so they didn’t let him go. Instead, they decided to move him into another group until they could find a more suitable position for him.

Well, guess whose group they decided to move him into? Of course! Ours! I was completely dumbfounded. From the standpoint of an organizational chart, moving Martin into our group didn’t make one bit of sense. Our group wasn’t big enough to be divided between two Creative Directors! Our current Creative Director didn’t even need an assistant! What we could use, however, was another art director. And since Martin began his career as an art director, that was the function he would be fulfilling.

So an office was prepared for Martin, and in advance of his arrival, he was assigned a project. The only thing he needed was a writer to work with. You see what’s coming next, right? You got it. The only logical choice of a writer to pair up with Martin was . . . me!

No! How could this be? I escaped that man years ago! Why would we have to work together again? Why? Why? Hmmm . . . why, indeed? Could it be there was a lesson I needed to learn?

Well, guess what? With my willingness to see this situation as a possible learning lesson, I had an immediate epiphany. Yes, it was true that Martin never asked for my assistance when he took the job I thought was going to be mine. But it was also true that I never offered him any help! The real truth of the matter was that I resented Martin for “taking my job,” and I had no intention of helping him be successful.

But did he actually “take my job?” Of course not. I just didn’t get the job, and he did. And there were reasons for that. In that moment of clarity, I realized what would have been the right thing to do back then. I should have simply gone into Martin’s office and said, “Let me know if you need any help. And if there is anything you need to know about our clients, or the history of our group and our work, I will be happy to fill you in.”

Now—miraculously—I had a second chance to do the right thing. And I knew just what that would be. I would tell Martin that I really looked forward to working with him on our upcoming project. And you know what? That sentiment was completely sincere. You see, I knew that before he moved into management, Martin was an excellent art director. And I truly believed that we could create a wonderful advertising campaign together.

Having had my epiphany on a Friday, I decided to put my sentiment in a handwritten note, and leave it on Martin’s desk for him to find on Monday—the day he was slated to start working in our group. I don’t know whether Martin ever got that note or not. Because he didn’t come in on Monday. Or Tuesday. Or ever. As it turned out, the company did find a better fit for Martin, and over the weekend they moved him into a completely different area of our agency.

As shocked as I was when I heard Martin was coming into our group, I was equally shocked to hear that he been moved somewhere else before he even got started. Wow! I couldn’t help but feel this whole scenario was divinely orchestrated for my benefit. And I did, indeed, benefit. By finally getting honest with myself, I was able to let go of my unfounded resentment toward Martin, and relieve myself of an emotional burden I had been carrying around for years.

A lesson had been learned. A healing had happened. And then—instantly—the very challenge that set the stage for that maturing experience simply disappeared. That’s not to say that every challenge I have faced in life has dissolved in a heartbeat. Plenty of challenges have lasted a lot longer than they probably had to, due to my resistance to them. But to this day, I remain extremely grateful that in this particular instance—and a few others like it—I was able to learn my lesson . . . the easy way.

What a fantastic example of what can happen when we let go. It can be removed in such a complete way, like what happened for you with Martin.

I love this story!!

Got to know the good things

Usually the lessons are learned the heard way, but its good to know hat they can be learnt the easy way as well. Nice article!