Just A Bend In The Stream? 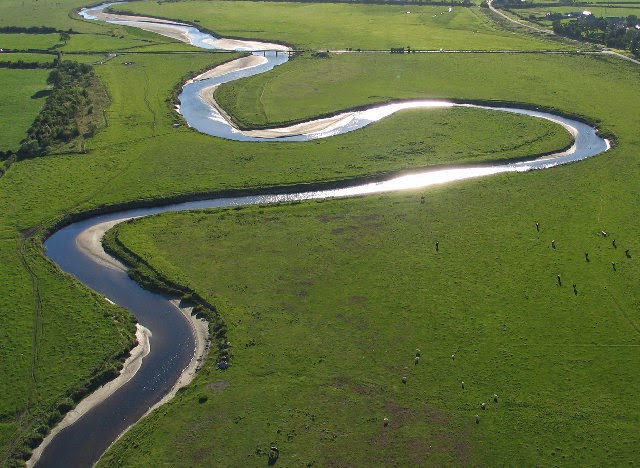 
Before I came to understand that there is a divine flow in life—a flow that is continually guiding us toward our highest good—I had the same reaction to almost everything that occurred in my life that wasn’t obviously beneficial. My immediate reaction was almost always, “Oh no! This is bad. What am I going to do?”

Notice two things about that reaction: First, I assumed that whatever was occurring couldn’t possibly be to my benefit. And second, I believed there was something I needed to do about it—some action I immediately needed to take to remedy the situation.

When I began to learn more about the divine flow, however, I discovered that a so-called “bad” situation is often just a “bend in the stream”—a bend that might lead you in an unwanted direction for a while, but will later prove to be the best way for you to reach your chosen destination. If you interfere with that flow—if you try to take control of the situation too hastily, and try to force things to go the way you think they should go—you might undermine the miracle that was in the making.

The following story is a good example of a time when I consciously decided to accept an undesirable situation and “row with the flow” . . . and it paid off beautifully:

I had recently been transferred into a new group at the advertising agency where I had spent many years writing television commercials for clients such as American Airlines, Long John Silver’s, and JCPenney. My new assignment was to create commercials for another one of our clients—Subaru automobiles.

One day, the creative director came into my office and told me he didn’t want me to write television commercials for Subaru anymore. Instead, he wanted me to develop newspaper ads. Newspaper ads? Sure, there can still be a lot of creativity in doing print work. And I was good at it. In fact, my entire career began 25 years earlier writing newspaper ads for Neiman-Marcus. But in the advertising world, all the prestige and glamour is in television—not newspaper! Going back to that kind of work felt like a huge demotion.

Naturally, my first thoughts were, “Oh no! This is bad. What am I going to do?” And you know what? There was something I could do. I was highly respected by the president of our agency, and I firmly believed if I complained to him about my “demotion,” he would either restore me to my position as a television writer or put me to work creating TV spots for one of our other clients.

But I didn’t do that. At that point in my life I had been practicing the principles for living life in the divine flow for quite some time, and I had learned how to respond instead of react. So, even though this circumstance didn’t line up with what I thought was best for me, I hesitated before taking action. I got quiet, went within, and asked myself this one simple question: “What is my next right step—my divinely guided step?”

Based on my inner guidance, I sensed that—in this particular instance—the best action I could take was to take no action at all . . . at least, for the time being. For now, I would just wait patiently and see how things played out. Well, the blessings began to bloom almost immediately.

In no time at all I rediscovered how satisfying it can be to create print ads. I impressed myself with the number of clever headlines I could come up with for any given subject about Subarus. Plus, I enjoyed the immediacy of it all. Within days of having a great idea and selling it to the client, my ad would appear in print. Conversely, to conceive, sell, and produce a television commercial could take weeks or even months.

And then the biggest benefit appeared. Our agency had lost some significant business over the years, and there had already been two rounds of layoffs. A third layoff was announced, and upper management looked closely at each department to see who was expendable. Guess what? When they examined the Subaru group, they determined we didn’t need all the television writers we had, and several were laid off. But my portion of the business was earning the agency a good income, and they weren’t about to sacrifice that . . . or me.

So, was my “demotion” a bad thing? Of course not! It was because of my new position that I was able to stay with the agency for another year or so, doing work that was creatively, as well as financially, rewarding. What appeared to be an intolerable situation at first, turned out to be just a bend in the stream.

Now, does this example mean that every single unwanted circumstance that occurs in your life is just part of the flow—a simple bend in the stream? No. Many undesirable events that occur in your life are not part of the divine flow at all. They are, instead, the unfortunate consequence of freewill choices you and/or others have made that are unguided or misguided—the kind of choices that are not in alignment with the guidance of The Divine. Fortunately, it’s not important to know whether an unwanted situation you are experiencing is part of the divine flow or not. Why? Because the flow will continue to guide you to your highest good from wherever you are in life . . . no matter how or why you arrived at that point.

That means the best way to respond to any undesirable situation—no matter what brought it about—is always the same: Instead of hastily judging the situation as “bad” and then rashly acting on that judgment, simply reaffirm the following: “This can be a stepping stone to my highest good.” That little bit of positivity is all it takes for your mind to be more open and receptive to divine guidance . . . so you can more easily discern what part, if any, you are being divinely directed to play in the unfolding of that good.

No matter how detrimental you perceive a situation to be, avoid the temptation to immediately take matters solely into your own hands. Instead, be patient and give the divine flow some time to work things out on your behalf. You will be amazed by the miracles that can manifest whenever you let go of what you think you know . . . and row with the flow.

Email ThisBlogThis!Share to TwitterShare to FacebookShare to Pinterest
Labels: bend in the stream, blessing in disguise, divine flow, flow